Cycle Around the Globe

Cycle Around the Globe 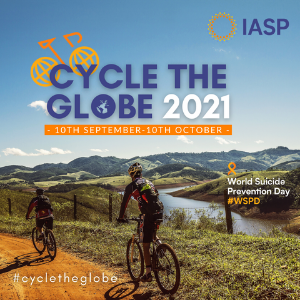 Every 40 seconds someone takes their life, almost 800,000 people a year around the world. For each suicide approximately 135 people suffer intense grief or are otherwise affected resulting in 108 million people, annually, are profoundly impacted by suicidal behaviours. For every suicide, 25 people make a suicide attempt and many more have serious thoughts of suicide.

IASP’s Cycle Around the Globe campaign aims to raise awareness for suicide prevention efforts around the world over the period surrounding World Suicide Prevention Day and works to support IASPs work promoting evidence-based action in order to reduce the incidence of suicide and suicidal behaviour. This campaign is about finding mechanisms to spread the message exponentially into areas where there is limited knowledge of these life/death issues. We want our global community to engage with each other and to join together to spread awareness of suicide prevention. From the 10 September- 10 October 2021, we are asking you to cycle any distance on any road, track or gym and help us work together to prevent suicide.

We are proud to announce the #WorldSuicidePreventi

Storytelling is an important component within Aust

Along with IASP’s major rebranding, we are pleas

We are very pleased to present the new #IASPGOLDCO

Whilst IASP is not a crisis centre and does not of

💥WELCOME TO OUR NEW LOOK! 💥 Designed by App

💥NEW WEBSITE NOW LIVE! 💥 This has been a ti

Every 40 seconds someone dies by suicide. Acknowle

The COVID-19 pandemic has impacted all aspects of

On #WorldHealthDay, IASP supports the @who princip

Connections with others and our communities are so

📌 The #MENTUPP TC meeting took place last Wednesday and our #partners reported all major updates of the month!

'Creating Hope Through Action' signifies the resolve to impart a new sense of purpose – empowering and equipping peoples with the skills and confidence to connect with someone they think may be struggling.” #WorldSuicidePreventionDay

IASP President Rory O’Connor says; “As we continue to work on our vision of a world where fewer people lose their lives to suicide, we believe “Creating Hope Through Action” is an optimistic message that aims to inspire confidence in people to engage with this complex subject.”

We are proud to announce the new #WorldSuicidePreventionDay theme for 2021-2023 is 'Creating Hope Through Action'. Over the next 3 years, we aim to create a movement of preventative action, to drive behaviour change & ultimately, prevent more suicides. https://t.co/QPp4uBvZzI

Storytelling is an important component within Australian Indigenous art & we have been privileged to have this unique piece portraying the importance & benefits of a global conference coming to Australia's Gold Coast. Read the full story here 👉https://t.co/xNIkkrQqEO

Final call for abstracts! 🚨📣 This is your last chance to submit Symposia & Workshop abstracts for #IASPGOLDCOAST2021. Please ensure all submissions are made by 23:30 AEST and meet the criteria listed here 👉 https://t.co/TZXppw00Ob

@MartinaMcGr @MarcBryantAu @findahelpline @livefortmw @switchboard_vic Thank you so much for the feedback Martina - We really appreciate it. We've passed this on to @findahelpline who are continuously updating their site and welcome referrals.

#GriffithUni's @aisrap researchers were involved in this important study, examining suicides occurring around the world during the #COVID-19 pandemic. https://t.co/cTo1nAhteS

We are incredibly excited to announce that we've collaborated with @iaspinfo to support even more people find the help they deserve with @findahelpline.
💜🧡💛 We're now available in 60 countries! 🌍🌎🌏 And we've even refreshed our brand 😍 Check it out: https://t.co/z7ZgujPtl5

We are pleased to present the new website for the IASP 31st World Congress, which provides a fresh experience alongside regular updates for everything we have in store for #IASPGOLDCOAST2021. Take a look for info on registrations, programme & more! 👉 https://t.co/KZMqQ6FGMH

We are delighted to present the #IASPGOLDCOAST2021 logo. Indigenous artist, Alara Geebung (Cameron) has created a unique piece of art to welcome the 31st World Congress to the Gold Coast & it was important for us to capture the essence of Alara's message within the logo.

Whilst IASP is not a crisis centre, as the global lead in #suicideprevention, we share a resolve to connect people in crisis to help. Our new website holds a collaboration with @findahelpline by @livefortmw, an online tool that connects people to helplines in over 50 countries.

📢The IASP Early Career Group are delighted to have their own section on the fantastic new IASP website!

A great first meeting with our fabulous new Board!

🆕I was delighted to chair 1st meeting of the new Board of International Association for Suicide Prevention (IASP) earlier.

▶️ Want to know more about @IASPinfo, why not check out our new website, which went live today?

🆕I was delighted to chair 1st meeting of the new Board of International Association for Suicide Prevention (IASP) earlier.

▶️ Want to know more about @IASPinfo, why not check out our new website, which went live today?

Designed by Apple designer @alednotjones, the new logo merges IASP's informative and uplifting values to create a symbol that visually represents an eclipse, the umbra covering the bright sun beneath as a symbol of hope towards furthering #suicideprevention.

It has been a time of positive progress for IASP & we are delighted to announce the launch of our new website. We’ve built a site that provides a functional space for sharing info, strengthening our network & provision to our members. 💥NOW LIVE 👉https://t.co/j9Fu5ci4Nh

There is only 4 days left to submit your Symposia and Workshop abstracts for #IASPGOLDCOAST2021. The submission portal will close on April 15th 2021 at 23.30 AEST, please ensure your submission meets the criteria listed here 👉 https://t.co/TZXppw00Ob

🔔 We are looking for men, or people who identify as male, to complete a survey to help us better understand male suicide. Please can you share the survey link with friends, family, and your networks? THANK YOU.
➡️https://t.co/YDvfy87enX

Suicide remains illegal in at least 22 countries worldwide & attempted suicide is punishable under Sharia law in more. On #WorldHealthDay, IASP promotes the decriminalisation of suicide and suicidal behaviour to build a fairer, healthier world for all. #HealthEquity #HealthForAll

The #COVID19 pandemic has impacted all aspects of people’s lives. This #WorldHealthDay, IASP supports the call for a fairer, healthier world by highlighting how vital it is for #mentalhealth & #suicideprevention to remain priorities in order to achieve #HealthForAll.

Every 40 seconds someone dies by suicide. Acknowledging suicide as a public health priority is vital. Addressing #suicideprevention both within the community and in national policy is essential to achieve a fairer and healthier world. #WorldHealthDay #HealthEquity

Roses in the Ocean@RosesInTheOcean·
7 Apr

Nominations are open for @SuicidePrevAU's annual LiFE Awards, which recognises outstanding contributions in the realm of suicide prevention within Australia. The awards celebrate the commitment of the nominees and their vital contributions.
More info: https://t.co/ySZ89cFbpk

📢 This #WorldHealthDay2021, the #MENTUPP consortium proudly supports the call for a #fairer, #healthier world.

🔍#COVID19 has been affecting all our lives and has highlighted how both our #physical and #mentalhealth matter.

It's time to #invest in your health & #HealthForAll🥇

Deadline fast approaching! 📣The Symposia and Workshop abstract submission portal for #IASPGOLDCOAST2021 will close at 11:30 AEST on April 15th 2021. #Suicideprevention related topics to be considered can be found here 👉https://t.co/IR3BRTmMkn

*PhD Opportunity* Fully Funded 4-year PhD with EU fees as part of the @tcddublin Provost's PhD Project Award. 'The Pathway to the Emergency Department - A national study of Paramedics' experiences and training needs when responding to people with self-harm and suicidal behavior'.

📣 Investing in #mentalhealth in the #workplace is essential now more than ever! ⬇️

📌Listen to our Project Coordinator, Prof. Ella Arensman, and check our website in bio to find out what you can do!

New vital statistics on the leading causes of death in the US for 2020 show a 5.6% decrease in suicide deaths, accessible at: https://t.co/leyPPPdzuU via @JAMA_current part of @JAMANetwork

Have you got an interest in #globalhealth? #Suicideprevention? #Domesticviolence?

Pls consider applying for this masters by research project. Funding is available for candidates who meet criteria (see advert)

Delighted to be part of the international audience at tonight's #chatsafe event!

Co-design has always been at the heart of the chatsafe guidelines - from the outset. Co-design is ethical and imperative.

Tonight we will be talking about ethics, safety & the role of the #chatsafe project in helping young people communicate safely online. We are honoured to have some of our @RMIT students on the panel with us & @GregHuntMP opening the event. Tune in online. #SuicidePrevention https://t.co/UQUY9GBkee

@suicideresearch's SBRL 5th EMCR Forum will be online this year on the 17th & 18th of June.

We are honoured to have Prof. Ann John and Prof. Thomas Niederkrotenthaler as keynote speakers.

Deadline extended! 📣The Symposia & Workshop Abstract Submission Portal for #IASPGOLDCOAST2021 has been extended. This is due to the ongoing effects of #COVID-19 on multiple countries & the constraints this has placed on many to meet the original deadline. https://t.co/aDhSNoDU3h

@blackdoginst are recruiting for someone to work to implement their five-year plan to improve and expand on being a trusted partner with Aboriginal and Torres Strait Islander communities. Location is negotiable!

Important podcast on the topic of suicide means restriction; why it’s important, the current state of research and future areas for inquiry. @IASPinfo @SuicidePrevAU https://t.co/BmM2ldBHCt

#TriggerWarning - we discuss suicide methods in this podcast aimed at researchers and policy-makers.

Let's #invest to promote #mentalhealth in the #workplace 🥇

Connections with others and our communities are so important in preventing suicides. #InternationalDayofHappiness celebrates being happier, kinder and together. We can all play a role through stepping closer and reaching out to someone who may be struggling.

The 12th Triple i Virtual Conference will take place 25-27 May 21. Brought to you by Slovene Centre for Suicide Research, De Leo Fund Onlus & IASP, it aims to promote intuition, imagination & innovation in research & prevention of suicidal behaviour 👉https://t.co/uyp5ptS4Rt

Check below ⬇️ our Pillars of Wellness🌞 and try to balance them into your daily life.

#IASPGoldCoast2021 provides the 1st global opportunity for leading experts, researchers, people of lived experience, other advocates, or anybody working in suicide prevention; for all of us to come together & share & learn from each other.
https://t.co/sHmlZIrrpA

📢 The online platform #MENTUPP HUB is ready to be tested in our #Pilot Study that starts in May!