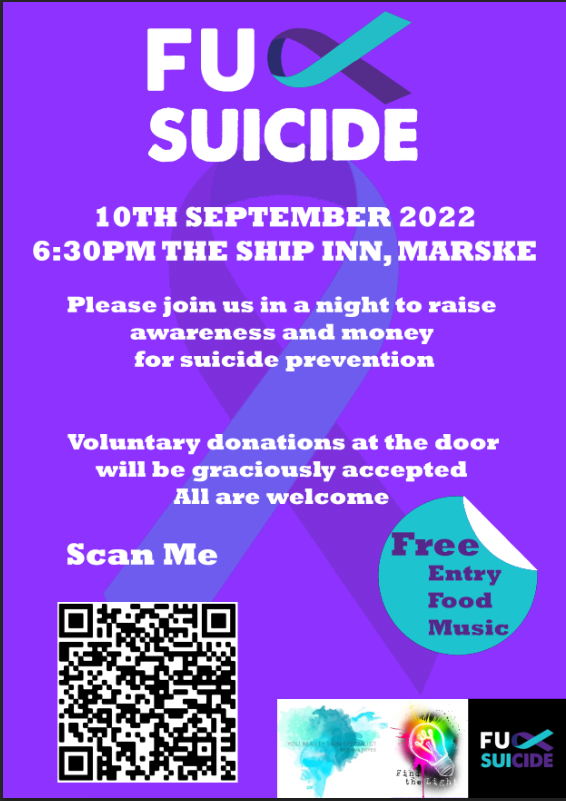 Every year, on the 10th September, people from around the world come together to raise awareness in order to provide worldwide commitment and action to prevent suicides. This year a small group of us will be setting off from Scarborough lighthouse on the evening of the 9th September to walk through the night into the light of 10th September 2022 to raise much needed funds and destigmatise mental health. We have decide to raise money for two local causes; Veterans At Ease and Find the Light.

Find the Light is a mental health advocacy and support group which was founded by Rory Logan in 2019. Find the light continue to support their local community to fight against mental health, child and neonatal bereavement and bullying. The money raised will be going to 3 charities; SANDS (stillbirth neonatal and death society), SHELTER, and Saltburn Skate Park.

we will also be hosting a fundraiser, starting 18:30 on the 10th September, at The Ship, Marske-by-the-sea, High Street, TS11 7LL. Please join us in raising further awareness and much needed funds. Enjoy amazing food, live singers, games and prizes and our resident DJ Mackenzie to finish off the evening.

More than 4300 people still die by suicide in England and Wales each year and at least 1 person in every 100 who ends up inn hospital after a suicide attempt will succeed within a year. Suicides ad suicide attempts also impact families, friends, communities and societies. While the link between suicides and mental health is well established, many suicides happen impulsively, in moments of crisis. Every life lost to suicide is a tragedy.

Suicides are preventable but sadly not inevitable. As a community we can help by joining the fight, raising awareness and standing up for those who need us in their darkest hours.