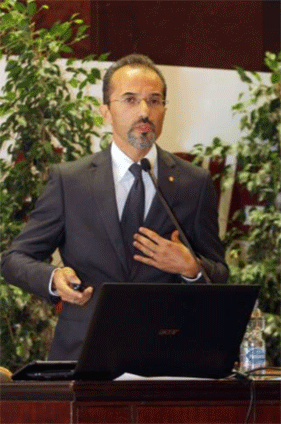 Maurizio Pompili, M.D, Ph.D. is Associate Professor of Psychiatry and Professor of Suicidology as part of the Faculty of Medicine and Psychology at Sapienza University of Rome, Italy, where he received his M.D. degree, where he trained in Psychiatry (both summa cum laude) and where he has doctoral degree in Experimental and Clinical Neurosciences. He is the Director of the Suicide Prevention Center at Sant’Andrea Hospital in Rome. He was also part of the Community at McLean Hospital – Harvard Medical School, USA where he received a fellowship in psychiatry. He is the Director of Psychiatry Residency Training Program at Sapienza University of Rome. He is the recipient of the American Association of Suicidology’s 2008 Shneidman Award for “Outstanding contributions in research in suicidology”. He is the Vice-President of the International Association for Suicide Prevention (IASP) and member of the International Academy for Suicide Research and the American Association of Suicidology. He has published more than 350 papers on suicide, bipolar disorders and other psychiatric perspectives, including original research articles, book chapters and editorials. He co-edited ten international books on suicide (including the latest Evidence-based practice in suicidology with Hogrefe & Huberr and Suicide in the words of suicidologists with Nova) and he is the author the latest Italian book on suicide “La Prevenzione del Suicidio, Il Mulino, 2013.” Maurizio is particularly active in collaborations with Italian institution such as the Italian Ministry of Health, Italian Health Institute, Dipartimento della Gioventú, Polizia di Stato, Carabinieri, Areonautica Miliatare, Guardia di Finanza, Santa Sede and Vicariato di Roma. He received the “Medaglia del Presidente della Repubblica” as a recognition for the activities of World Suicide Prevention Day 2015.