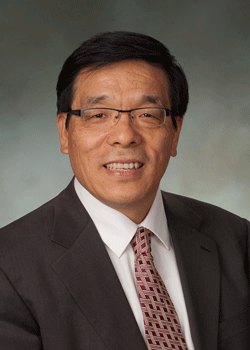 I am a professor of epidemiology and the founding director of the Center for Suicide Prevention Research at Shandong University in China and am a tenured professor at State University of New York Buffalo State. I was educated in the United States of America with a Ph.D. degree in sociology. In the past decades, I have devoted my research and scholarship to suicide studies and suicide prevention in rural China with a number of NIMH grants and over 100 publications in both English and Chinese.

I have been active in IASP for over 20 years. This involvement includes faithfully presenting my research at annual meetings and serving on the Editorial Board of Crisis. Over the last 15 years I have received support for my China research in a series of grants from NIMH. This support has funded large sample research designs each based on several hundred psychological autopsies of suicidal individuals with community based, matched control groups in China. This work has been critical to my development of a social-psychiatric strain theory of suicide based on the interplay of psychiatric factors and cultural strains. My multi-disciplinary background will help me engage in dialogues with and represent a variety of research constituencies within the international community of suicide research.

Suicide in China remains a serious problem, although there has been a drop in the overall rates of suicide in the country. With its large population and relatively high rates of suicide, China should play a very important role in the world suicide prevention.