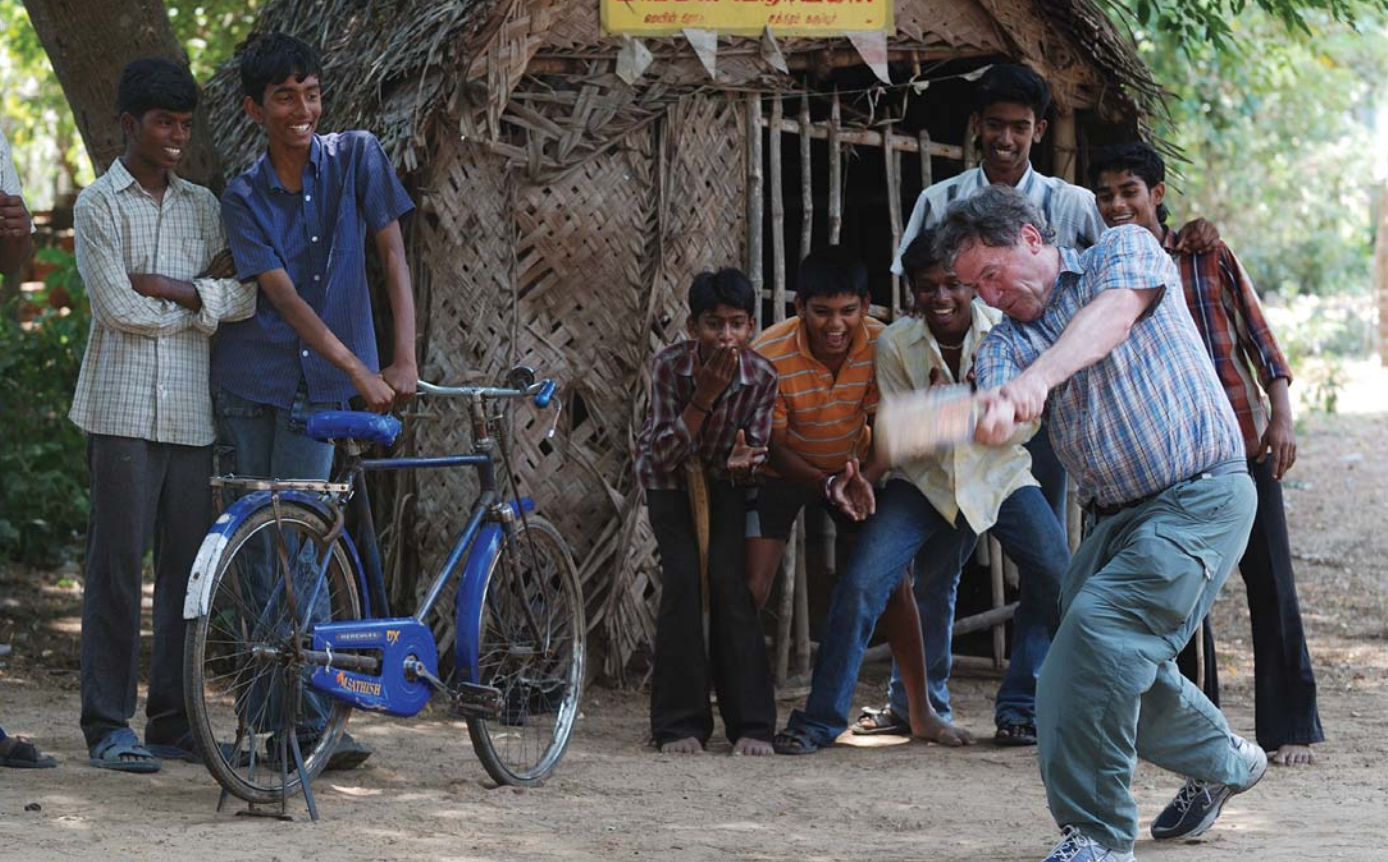 Meeting Professor Hawton in 1992 was a memorable occasion as it was over a cheese sandwich sitting on the cricket grounds at the Warneford, Oxford. We were there to discuss a potential future role as the IASP UK National Representative taking over the bat from Professor Louis Appleby – professor of psychiatry in Manchester. The result was a draw: “no” to the role as National Representative but “yes” to initiating the British Isles Suicide Research
Workshop, now in its 27th year!

Keith has led the movement of suicide research and prevention over 40 years, both nationally and internationally taking on the challenges of reducing suicide across the age groups but in particular focused on the young in combating the complexities of deliberate self-harm. He has advanced our parameters in suicide prevention for many years through embracing the top colleagues in research and in the voluntary sector; combating the use of analgesics as a means of suicide; and confronting the media in their reporting of suicide that has resulted in internationally acknowledged guidelines. The Oxford Centre for Suicide Research has an open door policy which promotes collaboration, consistency of evidence-based prevention strategies and continuity of a high standard of delivery.

His personal mantra has been from research to practice and those who have worked with him have fully benefitted from his ambition to share, mentor and collaborate in the global arena. Thinking back to the cricket grounds in Warneford, Oxford reminds me of another cricket pitch; one where on a working trip in rural India visiting a remote study site in Tamil Nadu on a hugely hot day, Keith suddenly asked the van driver to immediately stop at the side of the road where a team of young children were playing cricket with three sticks as a wicket. Keith was in there – joined the youngsters – conversed fluently in English whilst they listened and conversed in Tamil and so the game was played. We waited under a nearby tree watching him in his element, how the young loved it and how, we as spectators, admired his agility both physically and mentally.

As a friend I have enjoyed these interludes, endured many hours of Leonard Cohen; walked the golf courses “silently” post many conferences and shared the love of your family and until recently your wonderful wife, Joan.

Keith, so many congratulations from us all on receiving this prestigious award from Her Royal Highness, the Queen of the UK. Your dedication to suicide prevention is well deservedly endorsed and followed by your fellow researchers and international colleagues, your golfing buddies and most of all by your family and friends.

Cycle Around the Globe 2022

Making Mental Health & Well-Being for All a Global Priority

International Survivors of Suicide Loss Day is a t

🎙 Listen to our latest Reach In, Reach Out podc

The core principles of tolerance are respect, trus

We have reached an incredible 84% of our target fu

A big THANK YOU to every person and team worldwide

The criminalisation of attempted suicide undermine

Health is a human right and mental health is no le

We want to break down the major barriers by creati

Decriminalising suicide and suicidal behaviour all

Thinking of submitting an abstract for the IASP 32nd World Congress? The portal for symposia & workshops will close 28 February 2023 & the portal for oral & posters will close 30 March 2023. Please read the criteria before submitting 👉 https://t.co/rWiy6G0ujD #IASPPIRAN2023

A #PhD scholarship with the Black Dog Institute provides the opportunity to work closely with experts in the field of mental health research, and project funding in one of four key research areas → https://t.co/9kvy3iTjmk

👉I’ve answered some of the questions about suicide prevention.

The 2023 IASP Australasian Research Workshop has a fantastic line-up of experts and leaders. We’re seeking EOI from Early Career Researchers wishing to give an in-person lightning presentation. Register your interest before 7 December: https://t.co/KGPAxQCrZZ @orygen_aus

We're delighted to announce that one of the UK's leading suicide prevention experts, Professor Rory O'Connor @suicideresearch has joined our Board of Trustees at James' Place. Read more https://t.co/YEe50b9hq5

Many men face social pressures to keep personal struggles to themselves. Providing opportunities for boys & men to talk openly about their struggles is critical for #SuicidePrevention. Further resources in our outreach brief 👉 https://t.co/xRRzSNAAXF #Movember

At our @IASPinfo Board meeting earlier, great to get an update on reach of our World Suicide Prevention Month activities -especially rewarding to see marked growth globally in countries such as India, Nigeria, Indonesia & Philippines.

A call for applications for a funded #PhD in #Psychoanalysis & Culture @ Ulster University will be advertised at the end of Nov/beginning Dec. I’ll be the principal supervisor & am happy to hear from people interested in applying. For further info, email n.giffney@ulster.ac.uk

The strategy emphasises the importance of restricting access to #lethalmeans of suicide. 👇
🔗https://t.co/zWU1Izozet

The Ministry of Health & Family Welfare has just released a National Suicide Prevention Strategy. Suicide is a public health crisis rooted in structural and systemic failures — and so, this strategy is a landmark for suicide prevention in India: https://t.co/xm5tttif8G

More than 100,000 lives are lost to suicide each year in India. @MoHFW_INDIA has just released a National #SuicidePrevention Strategy, which will play a pivotal role in helping to prevent suicide & tackle stigma across the country. 👉 https://t.co/yIzDLYMxDu

On 'International Day of Survivors of Suicide Loss' we remember those we have lost and reach out to create a warm and supportive embrace with others #bereaved by #suicide and those who have died by suicide https://t.co/5M0CIUQrQz @IASPinfo @IASP_ECG @SuicidePrevAU @PostventionAus

Another MENTUPP paper is now published:

'The effectiveness of organisational-level workplace mental health interventions on mental health and wellbeing in construction workers: A systematic review and recommended research agenda'.

For Early Career Researchers interested in giving an in-person lightning presentation at the 2023 IASP Australasian Research Workshop, please submit the EOI form before the closing date of 1 Dec 2022 👉 https://t.co/Eqr8Hn9RTC

#SurvivorDay is vital for survivors of suicide loss to find connection, understanding & hope through their shared experience. For ways you can help to support those bereaved, download our Suicide & Bereavement outreach brief 👉 https://t.co/RRwGRgd4eR

International Survivors of Suicide Loss Day is a time when we reach out to each other around the world, creating a warm & supportive global embrace. We are not alone; we are together & will always remember & mourn our loved ones who were lost to suicide. #SurvivorDay

The global suicide rate is over 2X as high among men than women. #InternationalMensDay is pivotal in raising awareness to help create a more compassionate society where those in need feel more comfortable to seek help. Further info in our Outreach Brief 👉 https://t.co/xRRzSNAAXF

Providing opportunities for boys & men to talk openly and without judgement about their struggles is critical for #SuicidePrevention. This #MensDay, we acknowledge the importance of the theme 'Helping Men & Boys' in raising awareness. Further resources 👉 https://t.co/xRRzSNAAXF

🎙 Listen to our latest Reach In, Reach Out podcast episode with @suicideresearch joined by special guest @DrSandersanOnie in which they discuss the launch of the Indonesian Association for Suicide Prevention, tackling stigma & the #LombokDeclaration👇 https://t.co/Lb2rsy0gB7

Have you listened to the IASP podcast yet? 🎙

Launched this year, the ‘Reach In, Reach Out’ series aims to encourage understanding around the complexities of suicide, reduce stigma surrounding the topic & spark meaningful conversations.

The Listening Place (TLP) is a charity which offers face-to-face befriending by volunteers to people who are suicidal.

An article in our Crisis journal measured how this type of empathetic, nonjudgmental, listening service reduces suicidal ideation.

This #AntiBullyingWeek we’re joining @ABAonline to urge everyone to #ReachOut.

It takes courage, but it can change lives.

Just a few days left to apply for this role in suicide prevention research at Black Dog Institute! Click on the link for more info about a great opportunity to work with us. https://t.co/MxB2cyG7pI

Are you passionate about the prevention of mental ill-health & suicide? Do you have expert project management or research skills? A range of new opportunities to join the Everymind team are now available. Learn more: https://t.co/KULhUFa0sK

It's #InternationalStressAwarenessWeek. A module of our multilevel intervention addresses #stress, #burnout, poor #wellbeing, & non-clinical #depressive symptoms in the workplace. Learn more about the MENTUPP HUB: https://t.co/AFBQanCRbL

Make #mentalhealth a priority at work!

This recognises the threat of easy access to #pesticides and includes a plan to develop a Pesticide Control Policy.

Join us for this free 1-hour webinar tomorrow at 6.30pm (AEDT) where our panel will discuss what actions parents, teachers and the broader community can take to help turn the tide on depression and support mental health in our schools and communities → https://t.co/dORJM10ubZ

Final call for the last spots in our series of 4 workshops on the politics of suicide prevention.

No prior knowledge needed. Craft packs provided. Open to EVERYONE ☺️!

DM me or email Hazel.marzetti@ed.ac.uk

Commit to walking or running 60km over the month. That’s 60km for the 60 men we lose each hour, every hour across the world.

Men account for 3/4 of deaths by suicide in many countries. 🌎 The awareness raised through #Movember is pivotal in helping to create a more compassionate society where those in need feel more comfortable to seek help. Read our outreach brief here 👉 https://t.co/xRRzSNScmf

@kcmhr is accepting abstract submissions for the #EarlyCareerResearcher Showcase, part of the Veterans' Mental Health Conference 2023.

Our #HealthForAll Film Festival has become an incredible platform for telling powerful stories from around the world about people who face all kinds of health challenges, and those who devote their lives to improving health. You can also be a part of the #Film4Health movement 👇 https://t.co/VeJwWMXTSQ

World Health Organization (WHO) @WHO

Are you a researcher who has got tired of the long wait between research findings having an impact?
Then consider coming to join our growing team at Bristol (@BrisPopHealth). Get in touch for more info/informal chats. #globalhealth

For Early Career Researchers interested in giving an in-person lightning presentation at the 2023 IASP Australasian Research Workshop, please submit the EOI form before the closing date of 1 Dec 2022 👉 https://t.co/Eqr8Hn9k44

"I think it's time, and quite urgent, that we actually look at what might be the reasons and potential solutions to this." @HM_Christensen

Online and in-person tickets are still available for the #BDISummit on #SelfHarm. Secure your spot → https://t.co/DM6jrbLPwM