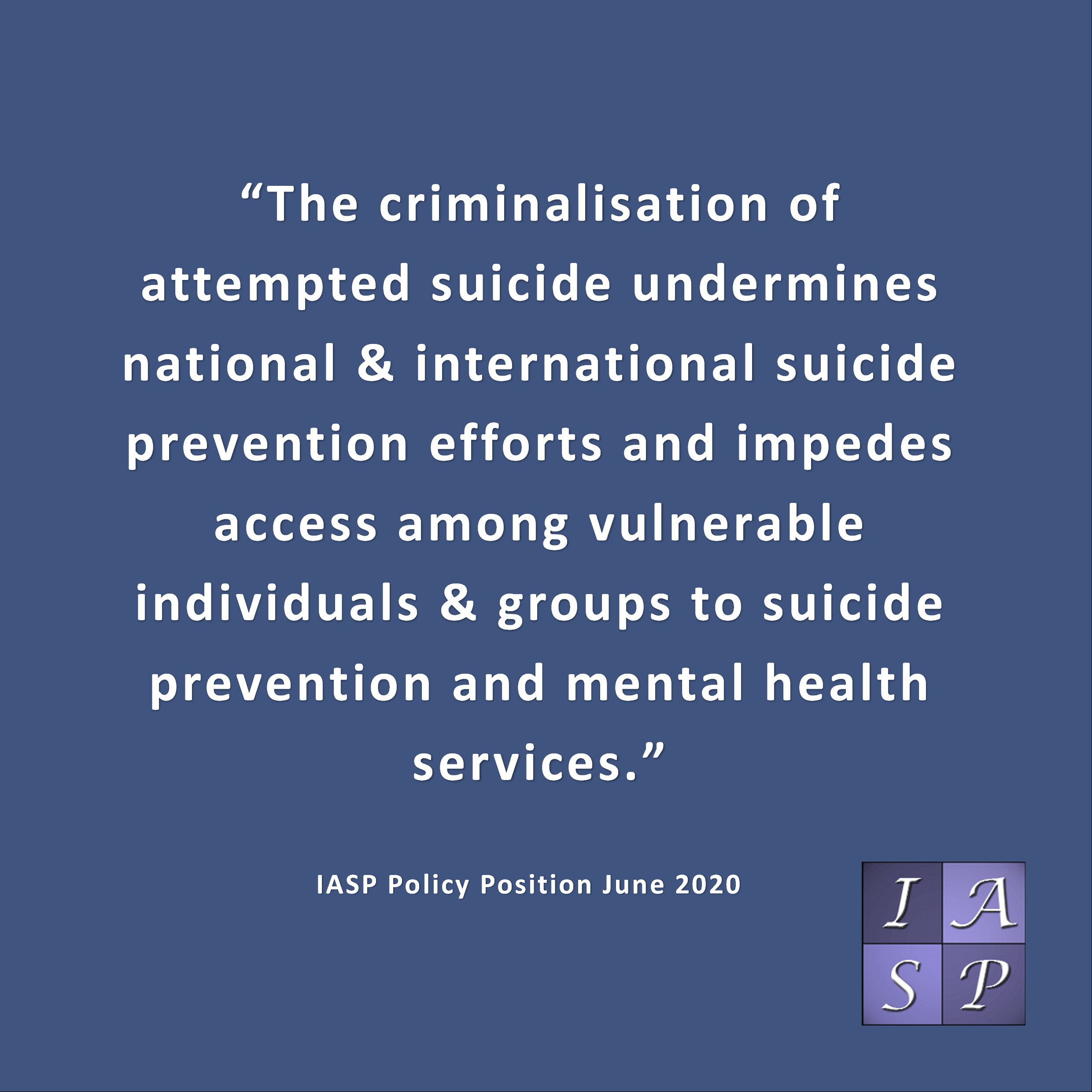 Members of the (IASP) recently ratified & passed a policy position statement on the decriminalisation of attempted suicide. This is an important step in suicide prevention & suicide awareness policy and advocacy efforts and supports current international efforts for mental health action and investment.

Suicide is a global public health problem and among the top 20 causes of death globally for people of all ages. It remains a universal challenge impacting millions.

Suicide is illegal in 25 countries which have specific laws for attempted suicide and in an additional 10 countries which follow Sharia law people who attempt suicide may also be punished.

Accessing healthcare is a fundamental human right. WHO (2014) found no empirical evidence that decriminalising suicidal behaviours leads to an increase in suicide rates and urges countries to “review their legal provisions in relation to suicide to ensure they do not deter people from seeking help”. In addition,

IASPs next step is to seek endorsements in support of this policy position statement from friends and wider networks, from large international organisations to community led crisis lines. We aim for these endorsements to raise awareness for the decriminalisation of attempted suicide but to also demonstrate the international will for this important step in advancing mental health policy.

More information on the decriminalisation of attempted suicide can be found here:

🎙 Tune into the latest episode of our Reach In,

We are delighted to be hosting the 2023 IASP Austr

This time of year can be tough. For those who may

The IASP 2021 Annual Report is out now! Despite th

Our Central Office is now closed until 3rd January

To achieve #HealthForAll by 2030, mental health an

Decriminalisation of suicide is a crucial step to

By raising awareness, reducing the stigma around s

Let's take time to reach out & talk to a family member, friend, colleague or even a stranger this #TimeToTalkDay - A day to start a #MentalHealth conversation, observed every year in the UK on 2 February. Read our resource on taking time to reach out 👉 https://t.co/elfgIbF43n

We are honoured to announce the IASP 32nd World Congress will be held under the honorary patronage of the President of the Republic of Slovenia Dr Nataša Pirc Musar. Visit https://t.co/edHAi5xmWz for more info. #IASPPIRAN2023 @nmusar #SuicidePrevention

On March the 1st it is self harm awareness day.

This is @HarmlessUK call to action.

Support the day.
We have prepared a media and social media pack, if you’d like to receive this to use the digital assets then get in touch.

Together we can save lives
#selfharm #siad #shad

New Paper Out! https://t.co/vGGbDitjKc
Here we show that we can identify behaviours preceding suicide at a frequently used location using CCTV, and use AI to detect these behaviours with high accuracy! This project won best poster award at @IASPinfo in 2021 🧵@blackdoginst

This is your last chance to register for the IASP Australasian Research Workshop. Don't miss the fantastic line-up of experts discussing #SuicidePrevention.

The final report from my research into the sharing of #livedexperience by #mentalhealth professionals in the #workplace is now available: https://t.co/Nk9phOFscH

It includes a bunch of helpful infographics & recommendations for individuals, supervisors & organisations.

New Research Assistant post in Psychosis Research Group at Glasgow. They are such a lovely team to work for - amazing study to be part of. If anyone is wondering how to structure a job application - I am happy to try and demystify the hidden curriculum.

📢📢 I am super excited to share this #LivedExperience Researcher role. Come work with me and a fantastic #SuicidePrevention team @orygen_aus on a project looking at the experience of young people who have a close family member who has attempted suicide. https://t.co/CYuDqcbeUz

Come & work with us! We're recruiting a part-time research assistant for 12 months to work across 2 projects on children's #suicideprevention - 1 piloting a prevention intervention in schools & 1 with @AlderHey auditing A&E data @poojaliverpool @SSHRG1

Lived experience Lead: We’re looking for new team member to continue to grow and develop our work to collaborate with LE experts in the work of our Mental Team and in the research we fund https://t.co/NWuCj4MY8o could this be you?

#Postvention guidance for Higher and Further education #StudentSuicide
Congratulations to all involved - I'm proud that my research contributed to this important resource.
https://t.co/NT83diZRmk

'Despite the challenges we have faced in the last year, as an international community, we still managed to come together & achieve extraordinary things.' - Read the latest message from IASP President, Professor Rory O'Connor @suicideresearch 👇 https://t.co/JPsEEM278w

I am looking for a new clinical postdoc to join our amazing child mental health team. Come and work with us @blackdoginst #mentalhealth #postdoc https://t.co/9btmaX6jBH

You might not want to miss this talk on youth and adolescent #mentalhealth in India https://t.co/edABcSEBR4

Join PATH on 24th February for a dialogue with experts to deliberate on envisioning the future of youth mental health as a national priority.
Scan the QR code to register!
@FondationBotnar
@MoHFW_INDIA
@OfficeOf_MM
@PATHtweets

Have you registered for the 2023 IASP Australasian Research Workshop yet? Join us alongside @orygen_aus on 8 - 9 February for a fantastic line-up of experts and discussion surrounding #SuicidePrevention.
Register today 👉 https://t.co/bA1TcbRc4l

We need #MentalHealth in all policies with a focus on prevention to effectively tackle it.

Today, we have published a call for evidence on the forthcoming Commission Communication on a comprehensive approach to mental health.

🎙 Tune into the latest episode of our Reach In, Reach Out podcast to hear from @suicideresearch, joined by special guests @Dee_Knipe & @piumee_b as they discuss domestic violence and #SuicidePrevention 👉 https://t.co/00TSrYz8Vh

It will be great event. Full details 👇

Roses in the Ocean @rosesintheocean ·
17 Jan

We're delighted to announce the Program for #LESUMMIT23 is now available, and you can view it here: https://t.co/xmxB3R2xe3

Also, you can learn more about our LE Summit and register here: https://t.co/9FQdUEmKrS

We hope you can join us in Hobart! 🌹

"It's flexible, it's online. 100% do it."
- Bridget Downey, Graduate Diploma in Youth Mental Health, School Counsellor.

Abstract submission is currently open for symposia, workshops, oral and poster presentations for the IASP 32nd World Congress in Piran. Please take a look through the criteria before submitting 👉 https://t.co/rWiy6G0ujD #IASPPIRAN2023

Seeking post-doc applicants for our new NIMH T32 training grant designed to train the next generation of #suicide researchers in the use of modern causal inference methods. Great opportunity to work with the brilliant @_MiguelHernan and team @CAUSALab! https://t.co/ikaDPyaLFV

📢We’re #hiring! There are 3 days left to apply for the role of Climate Change Consultant.

We are looking for an expert to develop and support the delivery of our #ClimateChange and #MentalHealth strategy. Find out more ⬇️

The PracticePal project is looking for an intern, to join us onsite at the @SangathIndia office in Goa. This is a paid, 3 months full-time internship.

For any further queries, do write to amruta.suryawanshi@sangath.in

Join us for the first edition of 2023 of our Monthly Research Webinar series on 19th Jan, 4-5PM IST.

We have Seetha Ramanathan, MD, MPA joining us to talk about ‘Suicide Safer Care and Zero Suicide Implementation in Health Care Institute’.
Register at: https://t.co/K7Z9HXImdN

It's always an incredible event: latest research exchanged in a supportive & inclusive environment

📢We are excited to announce that the dates for #EuropeanMentalHealthWeek will be:

The Week is all about starting conversations about #MentalHealth.💚

Save the date and stay tuned!

Our team are pleased to support this up-coming international event to be held in 9-11 October in Adelaide.
For colleagues with an interest in #mentalhealth #traumainformed practice, therapeutic engagement and recovery following trauma, plus refugee and settlement support. https://t.co/ZVCAreKncR

Join the upcoming webinar on Mental Health, Youth, and #HIV on January 10th at 14:00 Geneva time. The webinar is being organized by @STOPAIDS, Restless Development, @UNAIDS, the #GenEndIt Youth Campaign Steering Group, and the #GenEndIt Youth Ambassadors: https://t.co/oWURvyADQO

📣 Come work with us!

Please find below an opportunity to join the @ARC_EoE core team as a Senior Programme Support Officer.

This is an exciting and diverse role which includes leading on our communications strategy.

*New job vacancy at the NSRF*

Interested in research evaluation associated with the national roll-out of a new training model?

If you are looking for a new challenge in 2023 where you can genuinely make a difference in reducing health inequalities, then this #Community #Engagement role @EthnicHealthRes could be for you.

Opportunity for a Research Manager to join the @wellcometrust Mental Health Translation team and contribute to developing a portfolio of effective interventions.

📢Work with us! One week left to apply for the role of Climate Change Consultant.

We are looking for an expert to further develop and support our #ClimateChange and #MentalHealth strategy.

Interested in anxiety research? See below for info about a Research Assistant post with myself and a wonderful team @KingsCollegeLon @KingsIoPPN
Get in touch if you have any questions. Closing date Jan 22nd.
Please RT! @DrSFink @ckrahe1 @GrahamCLDavey
https://t.co/cnpamg58Zz

NEW JOB?? We are looking for a project coordinator or postdoc to join us on lots of exciting new projects developing psychological treatments for people with psychosis. Check out the details 👇 https://t.co/t5xHlgbo1w @OxPsychiatry @OxExpPsy

This time of year can be tough. For those who may be struggling, please know you are not alone. Free, confidential support is available 24/7 over phone, text or webchat 👉 https://t.co/Oa6IQizFua

We are delighted to be hosting the 2023 IASP Australasian Research Workshop at @orygen_aus on 8 - 9 February 2023. The event has a fantastic line-up of experts & aims to discuss the challenges faced in #SuicidePrevention. Register today 👉 https://t.co/bA1TcbRc4l

This time of year can be difficult, but know that there is support available if you are struggling. Access free, confidential support from a real person over phone, text or online chat 👇 https://t.co/Oa6IQizFua

Our Central Office is now closed until 3rd January 2023. Thank you for your continued support in 2022, we wish you all a happy & healthy 2023. This time of year can be tough, but know that there is support available if you need to talk. 👉 https://t.co/Oa6IQizFua