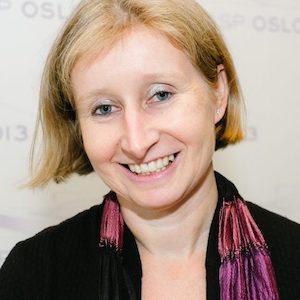 Professor Ella Arensman is Director of Research with the National Suicide Research Foundation (NSRF) and Adjunct Professor with the Department of Epidemiology and Public Health, University College Cork, Ireland. She holds an MSc and PhD from Leiden University, The Netherlands.

She has been involved in research and prevention into suicide and self-harm for more than 28 years, with emphasis on risk and protective factors associated with suicide and self-harm and effectiveness of suicide prevention and self-harm intervention programmes. In Ireland, she played a key role in developing Reach Out, the National Strategy for Action on Suicide Prevention (2005-2014), and she is currently involved in the development of the new Irish Strategic Framework for Suicide Prevention, 2015-2020. In recent years, she developed an innovative Suicide Support and Information System (SSIS).

She has published extensively in scientific peer reviewed journals and international textbooks, and she fulfils an advisory role on many national and international steering groups, and editorial boards, including Crisis.

Professor Arensman has a pro-active approach towards international collaboration in suicide research and prevention, reflected by her longstanding involvement in many international consortia, such as the WHO/Euro Multicentre study on Suicidal Behaviour, the European Alliance Against Depression (EAAD), Optimised Suicide Prevention Programmes and their Implementation in Europe (OSPI-Europe), Preventing Depression and Increasing Awareness through Networking in the EU (PREDI-NU), and Mental Health Training through Research Network in Europe (MARATONE).

In collaboration with the World Health Organisation, she has been pro-active in the development of national suicide prevention programmes in countries with limited government support. She has been involved in the recent IASP-WHO Global Survey on Suicide Prevention, which has provided new insights into suicide prevention in regions across the world for which limited information was available.

Professor Arensman’s vision for IASP over the coming years would be to actively encourage international collaboration in suicide prevention and research resulting in a more effective global strategy. A key direction would be to bridge the gap between researchers and policymakers in order to strengthen the implementation and evaluation of national suicide prevention programmes. For the growth of IASP, it will be important to empower young professionals to have an active role in the work of IASP.