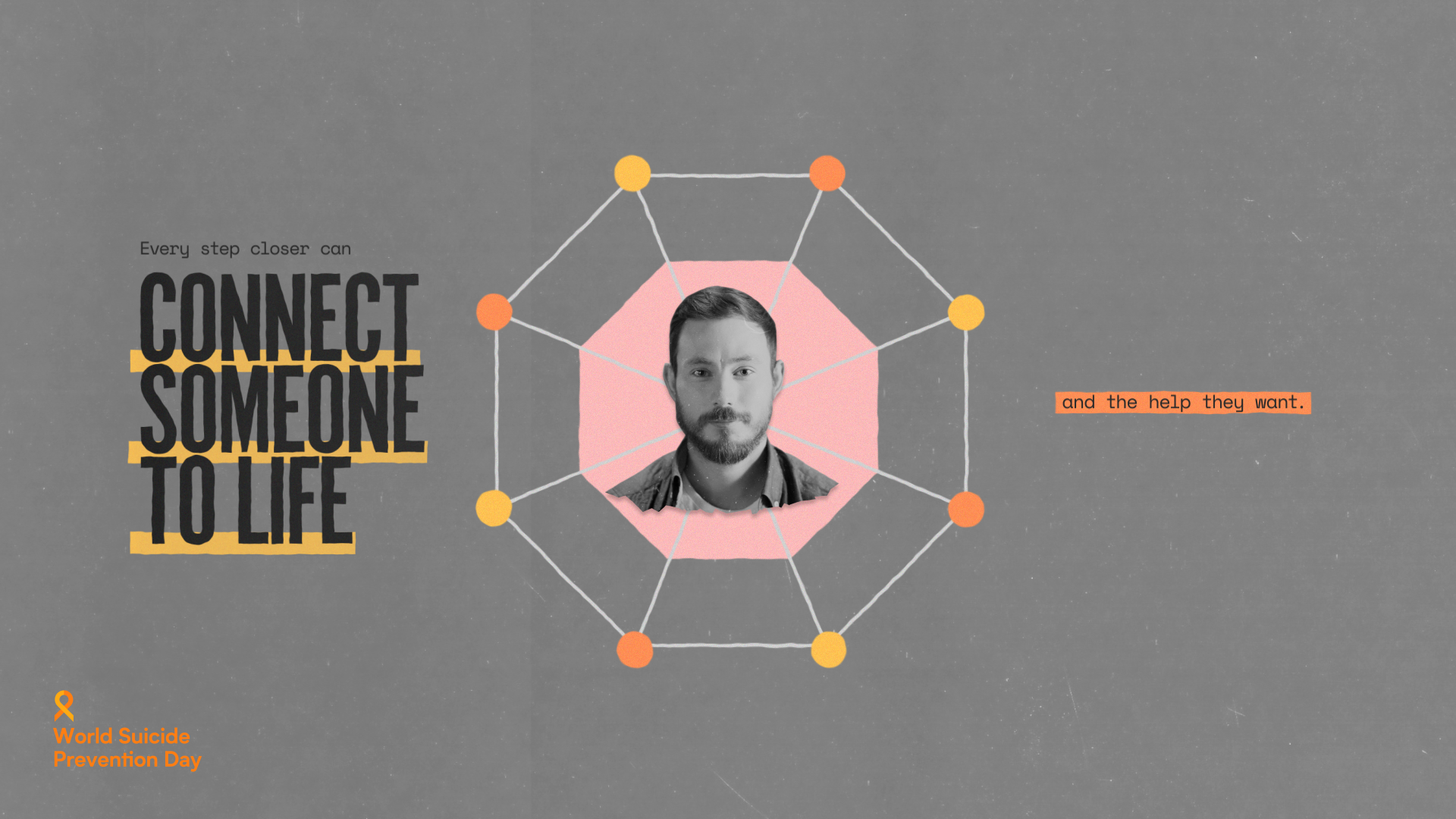 COVID-19 has resulted in 2020 being an unprecedented year for the world. The reach of both World Suicide Prevention Day (WSPD) and World Mental Health Day (WMHD) in 2020 has reflected the increasing need for greater consideration to be given to our mental health. Innovative campaigns and events online saw many activities being adapted and continuing despite the current circumstances related to the COVID-19 Pandemic.

‘Working Together to Prevent Suicide’ was the World Suicide Prevention Day (WSPD) theme for the final year in 2020. IASP produced the WSPD Awareness Film ‘Step Closer’ with the aim of highlighting the most essential component for effective global suicide prevention efforts; collaboration and that we can all play a role in preventing suicide. The film received over 33 million views online through Twitter, Facebook, Instagram and LinkedIn and was shared on other platforms and websites in many countries. Translations were also made into Korean, Italian and Spanish.

World Mental Health Day 2020 surrounded the slogan ‘Move for Mental Health’ urging movement towards ‘Mental Health for All: Greater Investment, Greater Access’. The combined reach of WMHD campaign activities online was over 235 million. IASP continued to promote the messages within the step closer film alongside the wider calls to action over the day. IASP also partnered with United for Global Mental Health in the first virtual ‘March for Mental Health’ that highlighted a global campaign with engagement from many countries highlighting different mental health considerations. The decriminalisation of suicide prevention was particularly highlighted within this platform. More information on WMHD can also be found in the 2020 Impact Report.

Cycle Around the Globe 2022

Making Mental Health & Well-Being for All a Global Priority

International Survivors of Suicide Loss Day is a t

🎙 Listen to our latest Reach In, Reach Out podc

The core principles of tolerance are respect, trus

We have reached an incredible 84% of our target fu

A big THANK YOU to every person and team worldwide

The criminalisation of attempted suicide undermine

Health is a human right and mental health is no le

We want to break down the major barriers by creati

Decriminalising suicide and suicidal behaviour all

Thinking of submitting an abstract for the IASP 32nd World Congress? The portal for symposia & workshops will close 28 February 2023 & the portal for oral & posters will close 30 March 2023. Please read the criteria before submitting 👉 https://t.co/rWiy6G0ujD #IASPPIRAN2023

A #PhD scholarship with the Black Dog Institute provides the opportunity to work closely with experts in the field of mental health research, and project funding in one of four key research areas → https://t.co/9kvy3iTjmk

👉I’ve answered some of the questions about suicide prevention.

The 2023 IASP Australasian Research Workshop has a fantastic line-up of experts and leaders. We’re seeking EOI from Early Career Researchers wishing to give an in-person lightning presentation. Register your interest before 7 December: https://t.co/KGPAxQCrZZ @orygen_aus

We're delighted to announce that one of the UK's leading suicide prevention experts, Professor Rory O'Connor @suicideresearch has joined our Board of Trustees at James' Place. Read more https://t.co/YEe50b9hq5

Many men face social pressures to keep personal struggles to themselves. Providing opportunities for boys & men to talk openly about their struggles is critical for #SuicidePrevention. Further resources in our outreach brief 👉 https://t.co/xRRzSNAAXF #Movember

At our @IASPinfo Board meeting earlier, great to get an update on reach of our World Suicide Prevention Month activities -especially rewarding to see marked growth globally in countries such as India, Nigeria, Indonesia & Philippines.

A call for applications for a funded #PhD in #Psychoanalysis & Culture @ Ulster University will be advertised at the end of Nov/beginning Dec. I’ll be the principal supervisor & am happy to hear from people interested in applying. For further info, email n.giffney@ulster.ac.uk

The strategy emphasises the importance of restricting access to #lethalmeans of suicide. 👇
🔗https://t.co/zWU1Izozet

The Ministry of Health & Family Welfare has just released a National Suicide Prevention Strategy. Suicide is a public health crisis rooted in structural and systemic failures — and so, this strategy is a landmark for suicide prevention in India: https://t.co/xm5tttif8G

More than 100,000 lives are lost to suicide each year in India. @MoHFW_INDIA has just released a National #SuicidePrevention Strategy, which will play a pivotal role in helping to prevent suicide & tackle stigma across the country. 👉 https://t.co/yIzDLYMxDu

On 'International Day of Survivors of Suicide Loss' we remember those we have lost and reach out to create a warm and supportive embrace with others #bereaved by #suicide and those who have died by suicide https://t.co/5M0CIUQrQz @IASPinfo @IASP_ECG @SuicidePrevAU @PostventionAus

Another MENTUPP paper is now published:

'The effectiveness of organisational-level workplace mental health interventions on mental health and wellbeing in construction workers: A systematic review and recommended research agenda'.

For Early Career Researchers interested in giving an in-person lightning presentation at the 2023 IASP Australasian Research Workshop, please submit the EOI form before the closing date of 1 Dec 2022 👉 https://t.co/Eqr8Hn9RTC

#SurvivorDay is vital for survivors of suicide loss to find connection, understanding & hope through their shared experience. For ways you can help to support those bereaved, download our Suicide & Bereavement outreach brief 👉 https://t.co/RRwGRgd4eR

International Survivors of Suicide Loss Day is a time when we reach out to each other around the world, creating a warm & supportive global embrace. We are not alone; we are together & will always remember & mourn our loved ones who were lost to suicide. #SurvivorDay

The global suicide rate is over 2X as high among men than women. #InternationalMensDay is pivotal in raising awareness to help create a more compassionate society where those in need feel more comfortable to seek help. Further info in our Outreach Brief 👉 https://t.co/xRRzSNAAXF

Providing opportunities for boys & men to talk openly and without judgement about their struggles is critical for #SuicidePrevention. This #MensDay, we acknowledge the importance of the theme 'Helping Men & Boys' in raising awareness. Further resources 👉 https://t.co/xRRzSNAAXF

🎙 Listen to our latest Reach In, Reach Out podcast episode with @suicideresearch joined by special guest @DrSandersanOnie in which they discuss the launch of the Indonesian Association for Suicide Prevention, tackling stigma & the #LombokDeclaration👇 https://t.co/Lb2rsy0gB7

Have you listened to the IASP podcast yet? 🎙

Launched this year, the ‘Reach In, Reach Out’ series aims to encourage understanding around the complexities of suicide, reduce stigma surrounding the topic & spark meaningful conversations.

The Listening Place (TLP) is a charity which offers face-to-face befriending by volunteers to people who are suicidal.

An article in our Crisis journal measured how this type of empathetic, nonjudgmental, listening service reduces suicidal ideation.

This #AntiBullyingWeek we’re joining @ABAonline to urge everyone to #ReachOut.

It takes courage, but it can change lives.

Just a few days left to apply for this role in suicide prevention research at Black Dog Institute! Click on the link for more info about a great opportunity to work with us. https://t.co/MxB2cyG7pI

Are you passionate about the prevention of mental ill-health & suicide? Do you have expert project management or research skills? A range of new opportunities to join the Everymind team are now available. Learn more: https://t.co/KULhUFa0sK

It's #InternationalStressAwarenessWeek. A module of our multilevel intervention addresses #stress, #burnout, poor #wellbeing, & non-clinical #depressive symptoms in the workplace. Learn more about the MENTUPP HUB: https://t.co/AFBQanCRbL

Make #mentalhealth a priority at work!

This recognises the threat of easy access to #pesticides and includes a plan to develop a Pesticide Control Policy.

Join us for this free 1-hour webinar tomorrow at 6.30pm (AEDT) where our panel will discuss what actions parents, teachers and the broader community can take to help turn the tide on depression and support mental health in our schools and communities → https://t.co/dORJM10ubZ

Final call for the last spots in our series of 4 workshops on the politics of suicide prevention.

No prior knowledge needed. Craft packs provided. Open to EVERYONE ☺️!

DM me or email Hazel.marzetti@ed.ac.uk

Commit to walking or running 60km over the month. That’s 60km for the 60 men we lose each hour, every hour across the world.

Men account for 3/4 of deaths by suicide in many countries. 🌎 The awareness raised through #Movember is pivotal in helping to create a more compassionate society where those in need feel more comfortable to seek help. Read our outreach brief here 👉 https://t.co/xRRzSNScmf

@kcmhr is accepting abstract submissions for the #EarlyCareerResearcher Showcase, part of the Veterans' Mental Health Conference 2023.

Our #HealthForAll Film Festival has become an incredible platform for telling powerful stories from around the world about people who face all kinds of health challenges, and those who devote their lives to improving health. You can also be a part of the #Film4Health movement 👇 https://t.co/VeJwWMXTSQ

World Health Organization (WHO) @WHO

Are you a researcher who has got tired of the long wait between research findings having an impact?
Then consider coming to join our growing team at Bristol (@BrisPopHealth). Get in touch for more info/informal chats. #globalhealth

For Early Career Researchers interested in giving an in-person lightning presentation at the 2023 IASP Australasian Research Workshop, please submit the EOI form before the closing date of 1 Dec 2022 👉 https://t.co/Eqr8Hn9k44

"I think it's time, and quite urgent, that we actually look at what might be the reasons and potential solutions to this." @HM_Christensen

Online and in-person tickets are still available for the #BDISummit on #SelfHarm. Secure your spot → https://t.co/DM6jrbLPwM